This 10 days Morocco tour from Casablanca to the Desert and Marrakech is a great option to explore the beauty of Morocco in 10 days itinerary desert trip from Casablanca, you will start visiting the imperial cities. Then, driving through the desert to experience to magic of the Sahara desert sand dunes where you will experience a camel trek. In addition, you will have an opportunity to visit the beautiful gorges and explore the famous kasbahs. Moreover, you will drive through the High Atlas Mountains… Also, we have other options such as a 10-day trip from Casablanca to Chefchaoune and Marrakech through Merzouga desert, 10 days desert tour from Casablanca to Marrakech through Meknes and Fes. If you are interested in some places and you want to visit them, our agency is ready to send you the right program depends on your choice…

Give a taste of the imperial cities, majestic desert and beautiful southern regions. Discover the capital city, ancient Fes and Moorish Meknes before slowing down to the pace of the desert cities. Make memories of riding camels for your magical night under the desert stars. Then, take the ancient caravan route from the Sahara to Marrakech, discover the road of the Thousand Kasbahs, Valley of the Roses and 300m high gorges – the beauty of this region is breathtaking…

After breakfast visits the impressive mosque Hassan II. Afterwards, we drive to Rabat, the capital of Morocco. During a city tour, we will see the Royal Palace, the Mausoleum of Mohammed V, the Hassan Tower as well as the Archaeological Museum and the Andalusian Gardens in the Kasbah Oudaya.

On the way to the royal city of Meknes, we drive today through an important agricultural area of Morocco. Meknes is famous for its 40 km long city wall with magnificent city gates. Thereafter, we drive through the Bab el Khemis and the Jewish quarter to reach the royal city, the Ville Imperiale. Here are the remains of a huge 17th-century granary and the mausoleum of Moulay Ismail. In the afternoon, during a city tour, we visit the old town with the central square El Hedim as well as the most famous gate of Morocco, the Bab Mansour.

Amidst the green foothills of the Atlas Mountains is the oldest of the four royal cities. From the Bordj Sud, we have a unique view of the old town of Fes. During the city tour, we pass Fes el-Djedid – here we see the royal palace and the Jewish quarter. We reach the old city district through the beautifully decorated Bab Boujeloud. The Blue Gate is the most magnificent entrance gate to the Old City. Decorated with blue mosaics on the outside and green mosaics on the inside, it is one of the landmarks of the city of Fez el Bali. In the old town, we visit among others the tomb of Mulay Idriss, the Koranic school Bou Inania, the Kairouine mosque as well as the college from the 9th century. Here, we will see the colourful souks of tanners, tailors, coppersmiths and chasers.

Across the Saiss plain, Morocco’s most fertile region, the road leads gently but steadily up into the Middle Atlas. Via Ifrane, Morocco’s winter sports resort, and Azrou, we reach the cedar forests – home to the Barbary Apes. A side road leads deep into the mighty forests where the monkey hordes can be observed. Just before the pass, a picturesquely situated crater lake offers a walk along its shore. Finally, we reach the plateau between the two Atlas mountain ranges. In Midelt, a small town, crossing the High Atlas, which offers unique erosions at the easternmost pass, which are not only a feast for the eyes of geologists. Through the Ziz Valley, Morocco’s largest continuous date palm oasis and Merzouga where you will spend your night in a hotel or riad.

Day 5: excursion in the desert:

After breakfast, we start our 10 days travel from Casablanca by 4×4 Car to circumnavigate the Erg Chebbi. We will visit the descendants of the black Africans skin who once came here as slaves. visit. A picnic awaits us in a palm oasis. Through the black mountains of the Kajal mines. After that, we reach the former French border station. And finally, we return back to the hotel. From here you start into the great content “nothingness” of the desert. After a cup of tea in the hotel, you will start the best experience may be in your life. You will ride camels into the desert camp. On the way, your camel guide will take you to the best corner where you will enjoy the magic sunset before you reach the camp. Finally, overnight stay in Berber tent.

After breakfast, we start today the beginning of our journey, marked by the stone desert which is gradually replaced by numerous oases, small villages and kasbahs. villages and kasbahs. In the Todra Gorge, the rock walls rise several hundred meters into the air at narrow opening meters into the air. Through the paradisiacal palm valley, we follow the course of the river Todra for a few meters on foot. The journey continues along the “Road of the Kasbahs” into the Dadèstal. During a short hike to a typical terrace restaurant, we will experience the oasis gardens up close. Overnight stay at the hotel in Boumalne Dades.

Our tour today leads us to visit the nomads in the caves and drive off-road. In addition, we will visit the city of Qalaat Makouneh, known as the City of Roses, where we will take a small tour to see the women of the region making rose water. After that, we will take Skoura Road where we will enjoy the many palm groves beside the road. Then, we reach Ouarzazate, which is known for its beautiful kasbahs, which is also called the Hollywood of Morocco, where many foreign films were shot in the Kasbah of Ouarzazate. Also, we will visit the films studios then spend the night in Riad or Hotel in Ouarzazate.

In the morning visit one of the most impressive Berber settlements of Morocco, the famous Kasbah Ait Benhaddou. It is a Unesco World Heritage Site and has been used as a backdrop for several famous movies. Afterwards, we cross the Atlas Mountains over the Tizi-n-Tichka Pass (2260 meters) and finally reach Marrakech. In Marrakech, you will have the opportunity to relax in your accommodation or to take a first stroll through the ramified souks with your guide.

During the city tour today, we will get to know the traditional sights of Marrakech, such as the Koutoubia Mosque (outside visit), the Saadian Tombs, the Bahia Palace and the Dar Si Said Museum. In the afternoon, we will visit the labyrinth of souks, the old town and the Jemaa el Fna square, where musicians, jugglers, snake charmers and acrobats create an impressive oriental atmosphere. Cookshops are set up in the square every evening, where the food tastes as good as it smells.

Transfer from Marrakech to Casablanca airport and return flight, alternatively extension stay (on request. The south of the Kingdom fascinates with unique, impressive landscapes: the often snow-covered Atlas Mountains, deep gorges, lush green oases and the sand dunes of the Sahara Desert. You will also see the residential castles and fortified villages of the Berbers and highly interesting cities.

Included in our 10 days Morocco tour from Casablanca:

Not included in Our 10 days Morocco tour from Casablanca:

– All lunches and drinks.

How to Reserve This 10 days Morocco tour from Casablanca?

Feel free to contact us by Email or WhatsApp for an actual Casablanca tour.

Note about our 10 days Morocco tour from Casablanca:

If you have only 1 week and you want to explore Morocco from Casablanca, click here

Some of our destinations:

Ifrane is not at all like other places in Morocco. Alpine-style houses, neat paths, well-groomed lawns, ski slopes … Just like in small European towns. Ifrane is called “Moroccan Switzerland”. It is like a piece of respectable Europe, accidentally brought to North Africa. Also, Ifrane is on the list of the cleanest cities in the world, the city with a huge number of storks. Almost every house has 2-3 nests. An unreal sight!. 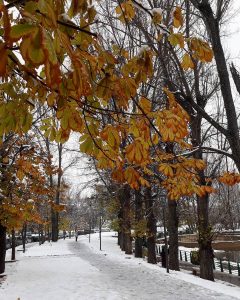 The valley of the Ziz river is of extreme importance for the people in the villages alongside its path, like Sijilmasse, Erfoud and Errachidia, the latter having also a hydroelectric dam. Some villagers have small canals that they use from the river to their own crops and for domestic use. It is also a touristic attraction, featuring places like the famous gorges of the Ziz river, the Merzouga village in the desert doors or the ancient village of Rissani, which demarked the ending of the trans-Saharan trade tribes route. Moreover, located in the High Atlas Mountains, the Ziz river in the south of Morocco has an extension of 282 Km. The river ends up giving rise to the Daura river and goes all the way into the Sahara Desert. 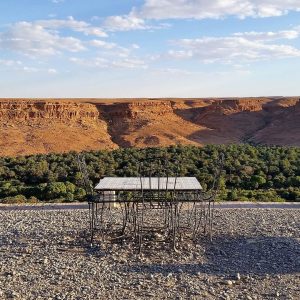 Merzouga, which is the Moroccan slice of the better known Sahara Desert.
The walk takes about an hour, you will be able to see the desert go from golden dunes and clear blue skies to being tinged with the colours of sunset, twilight and finally darkening showing the first stars as you reach your living room. Sitting on a dromedary for about an hour is an amazing feeling, it’s also an absolute must experience in the desert. 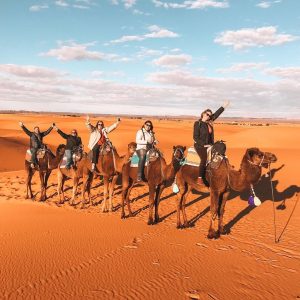 The Todra Gorges take their name from the river which is over the millennia, has carved them and today “timidly” continues to run through them. you can get around by car, by trekking, and you can even touch them with your hands if you feel like climbing. This territory of strong contrasts invites you to push your limits. Moreover, great enthusiasm the hospitality of Moroccans the incredible beauty of the Todra Gorge. Fantastic landscapes will open before your eyes once on the road to cross it. 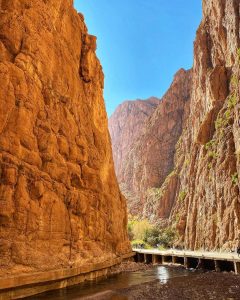 Ait Ben Haddou is a clear example of the architecture of southern Morocco. Getting lost in this labyrinth of adobe is an extraordinary experience, a return to the origin of time. Despite the deterioration, its essence remains the reddish buildings that blend in with the earth and the traditional mud and straw houses overlooking the Atlas. An image that the cinema has recreated on many occasions, since Ben Hadu has served as a film set in movies like The Jewel of the Nile, Sodom and Gomorrah, The Mummy, Game of Thrones, Gladiator, Alexander the Great, Babel and some scenes of the legendary Lawrence of Arabia. Its fame may endure thanks to the seventh art, but the truth is that its beauty is still unquestionable. 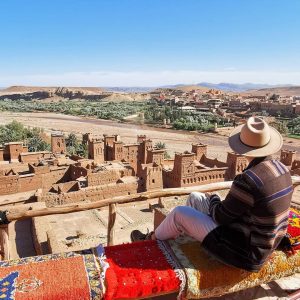